All good things come in fours – that’s what they say, isn’t it? Well humour us, as we’ve got four announcements we’re gagging to share…

A joint venture from Jack, the beating heart of AIM award-winning Alcopop! Records, and Liam, founder and editor of review blog 1p Album Club, The Lost Music Club is a brand new label with a difference. We hope to unearth unreleased gems that’ve sat unheard and potentially lost forever and introduce them to a wider audience through digital and physical releases. Read the full spiel here. 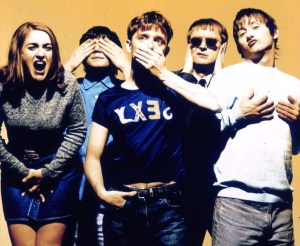 Our first signing, Speedy, formed in 1993 from the twisted remains of Sheffield’s stylophone-toting, love bitten anti-heroes Blammo. They were as much a part of the city’s scene as Pulp, Longpigs and Henderson’s Relish. But, in an all too familiar story, the “relentless touring on a diet of amphetamine, beer and chips, a radio 1 single of the week and appearing on any two-bit national and regional TV show that would have us…” wasn’t enough. Speedy were chewed up by the industry before their debut album had so much as been lifted from the studio’s tape machine (“and, yes kids, tape really did used to exist!”)

News From Nowhere is the Britpop gem that never got the chance to see the light of day. Left untouched until Twitter chat alerted us to its existence, the album is now getting its long overdue release on April 7th. Only 17 years later than its original 1997 scheduled release.

What can you expect? Well, News From Nowhere is a concept album that explores the people and tales of life on the urban fringes of modern Britain, as pertinent now as they were in the mid-90s. The songs are full of charm and occasional wry wit, with brash choruses and unashamedly catchy tunes. There’s an infectious joy and effervescence about many of these songs even when the subject-matter can be as harsh as barbed-wire on a garden fence.

We think that this album stands comparison with others of the era that are considered Britpop classics. The fact that it is only being released now shows how slim the difference between commercial success and failure in the pop world can be. The quality of the songwriting stands the test of time and we are proud to have this release as our debut The Lost Music Club release. Don’t just take our word for it, though.

Check out a free download of Heard, Seen, Done, Been and pre-order your copy of the album here!

Failing that, come and see them live…

To mark the launch of The Lost Music Club and to celebrate the release of News From Nowhere, we’re thrilled to announce two very special live shows. Speedy performing live for the first time in 17 years for a pairing of ‘one-off’ shows:

We’ll hopefully see you there!

One response to “WE ARE GO >> New label, signing, album and shows!”